These photos of Henry were taken about thirty minutes after the scheduled start of the Kokopelli triathlon at Sand Hollow reservoir near St. George, Utah. About 30 minutes after these photos were taken a massive storm front hit and the race had to be canceled. My age group never got started. I was supposed to start at 7:30, I was in the water warming up for quite awhile waiting for them to start the race. I had swam about 400 meters just warming up. The waves were pretty fierce! At about 8:30 the storm hit with hail, wind, rain and waves! The wind blew the finish line down! We were all pulled out of the water and the race was canceled. What a bummer! In the first photo, to the right of Henry’s head you can see one of the big triangle buoys that marks part of the swim course. 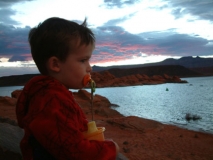 I was able to get my hands on this photo of Brian and Ann on their wedding day. What a couple! If anyone knows the date of the photo, or who the other people are in the photo, leave a comment or email me so I can update the post. 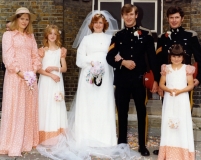