On June 30, 2005 a cherished part of our family was taken from us. Jenny Nicholl has been missing for almost 18 months, we pray and hope daily that news or information about her will come forward. The following is the Christmas update from her blog

To keep Jenny’s profile up over Xmas, boxes of small candles (tea-lights) have been placed in various shops in Richmond, inviting people to take one and light it for Jenny over Xmas. Over 1000 have been distributed so far and they are proving to be very popular as some of the outlets have been asking for more! The candles have been wrapped in clear cellophane with pink hearts and tied with ribbon. Attached to the candle is a small business card with a little poem on one side and Jenny’s picture on the other, along with the blogspot details and asking people to light a candle for Jenny. We are so so grateful to a ‘posse’ of friends who have gathered together on a number of occasions to make these little gifts and distribute them. (One in particular, who has taken the lead and I won’t name that person here…..but we are so indebted to you for arranging this). Also on the Xmas tree in the Co-Op where Jenny worked, mock presents have been hung, which have photographs of Jenny on the front of them. Some posters have also been refreshed, with different wording on them, to bring the point home, that Jenny has still not been found. Before Christmas, larger candles will be placed in about 3 of the pubs that Jenny played pool in. These have little miniature posters on 3 sides of each of them, with photo’s and little statements. Don’t forget to light a candle yourselves for Jenny over Xmas, keep your fingers crossed and pray that soon, we will get something substantial and positive, as soon as possible in the New Year.

On Saturday December 9, 2006 I was working on one of my current projects, a maple cabinet job for a utility room remodel, and against all wisdom and common sense had a quarrel with a router bit. It was a 3/4″ straight bit I was using for cutting dadoes into the back of the maple face frames. The bit was a little more ornery than usual because it is a “plungable” type bit which has an additional blade on the top of the bit to allow the bit to be plunged straight down into a project. One of the face frame pieces I was cutting bound on the router bit and was thrown out the far side of the router table. My left hand was controlling the piece as it was being cut, when the piece was thrown out my hand fell onto the router bit. Unfortunately, a router bit cut in flesh is not nearly as clean and precise as it is in wood. I have a laceration on the palm of my left hand directly below my index finger. It is approximately 1 1/4″ long and about 3/8″ deep. The bit then jumped to my thumb and left a bunch of surface lacerations. All of my tendons are safe and in place. It is merely a “flesh wound”! I am lucky, it could have been much worse. In lieu of flowers, please donate to the “Stop Jaren From Being Stupid” fund. 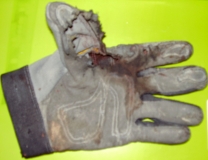