The Janke Family > Family > All Aboard!

Grammy (May) and Grand-dad (Tom) took the boys to a model train show at the Utah state fair grounds for Henry’s birthday. Henry was so excited I thought he was going to split in two! There were so many trains, I could see the conflict in Henry’s mind of which ones to look at first. Over stimulation! It was so much fun, we had a great time! All the trains at the show were very detailed models, and very expensive. But Henry really needed to add to his train collection. So, on the way home we stopped at Toys’R’Us and Henry purchased a new train with the birthday bucks Grammy gave him. He held the box in his lap the whole way home, and good not wait to set it up. 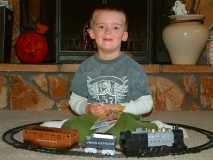