We had a great Christmas, we hope you did too! We continued our annual tradition/goal of having a fire every night in December. Nanny took Erik to see the Nutcracker for the very first time, which he liked almost as much as Indiana Jones, and Mo and Nanny got their Christmas gooses early at the Neil Diamond concert! Here are some previously un-released photos. The first is Henry performing at his Christmas program, and in the second we are showing of our fake teeth stocking stuffers! 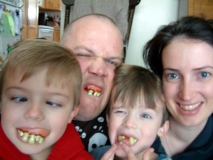