I was entertained most of the way home this evening by a C130 being escorted by four F16’s. However, once I got home the air show really started! The five aircraft would approach from the north, as though they were following State Street South. They would then bank East over the top of my house to the East bench then continue North. The group of aircraft repeated this approximately a dozen times, only slightly varying their flight path each trip. It was so much fun to watch! I attempted to capture them with my camera, but the pictures just cannot relay what reality was producing. I did get the group on video, and will share the video clips here once I get them edited and uploaded. Until then here are a couple photos: 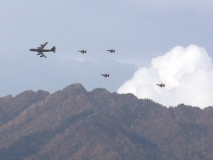