While Erik and I were blousing…uh, hmm, er I mean browsing the internet last night for Star Wars toys, I came across a great article at the Geek Dad section of Wired.com. it is titled “The 5 Best Star Wars Toys Ever Made” (link is HERE). As a child I only had one on the list, but it is probably the one I enjoyed the most, and the one that now triggers the most memories. It was the Imperial Troop Transporter. Grandma Lois bought it for me. I think she probably enjoyed watching me play with it more than I was enjoying playing with it. I would try and describe it to you, but while I was reading this section of the article I felt like it was exactly what I remember, and exactly what I would say.
“This was ridiculously fun to play with despite never having appeared in the (original) movies. It was supposed to have been part of the destruction of the Sandcrawler, but I don’t remember caring about that. It had “brainwashing” hoods you could put over rebel action figure prisoners, which I used all the time—in retrospect, as a parent, I wonder if that might be a little close to torture for comfort, but I seem to have turned out reasonably OK. The best part of this toy was the sounds. There were six buttons on the top that each made a different sound when you pushed them–there were your basic engine and laser sounds, but also R2-D2 squealing, C-3PO saying “R2-D2, where are you?”, a Stormtrooper saying “There’s one, set for stun,” and a few more. I pushed those buttons so many times I can still hear the sounds in my head, and recall how funny they sounded when the battery was dying. 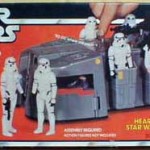